Let then all teachers in the Church learn to put on these two feelings — to be vehemently indignant whenever they see the worship of God profaned, to burn with zeal for God, and to show that severity which appeared in all the Prophets, whenever due order decays, — and at the same time to sympathize with miserable men, whom they see rushing headlong into destruction, and to bewail their madness, and to interpose with God as much as is in them; in such a way, however that their compassion render them not slothful or indifferent, so as to be indulgent to the sins of men. Indeed, the temper of mind which I have mentioned ought to be possessed, so that they may go forth as suppliants before God, and implore pardon for miserable and wretched men: but when they come to the people, in their new character, that they may be severe and rigid, let them remember by whom they are sent and with what commands, let them know that they are the ministers of God, who is the judge of the world, and ought not therefore to spare the people: this then is to be attended to by us. 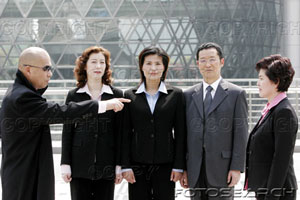 2 replies on “Severity and Tenderness”

Baby what does that picture have to do with pastoral care? It looks like the church of the mind controlling alien missionary.

The man out of the Matrix is being severe. Can you not see severity in every line of his rigid hand and pointing finger? The search that brought me to this little gem was, “Man scolding”.